My blog died. I didn’t. Actually I’ve been dealing with diabetes type 1 (adult onset), trying to find the funds to pay for the lifeline our team has become to tens of thousands of abused and marginalized people in Burma, and in between, being dad to three girls who are smarter than me. It’s tough. 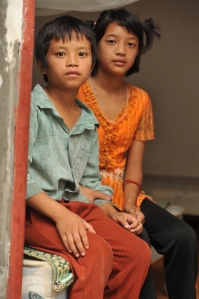 When I met these siblings they had run with their village friends while being attacked by the Burma Army. They don’t know where their parents are or if they are even alive. Partners provided food, medical care, and helped with shelter for them and their kin. Being refreshed with a sweet vacation, I refocus on the justice I want for kids like them. Thanks for being part of the effort.

To resurrect my poor blog, I wanted to write a long post about the Greek word for justice that is so often translated righteousness in the (NT) English bible. (But that would take all day and I only have ten minutes. So this is it.) I will write the long version later. You will love it. Or hate it.

But I love it and it changes everything when you read the beatitudes and see: “Blessed are those who hunger and thirst for justice (in the world), for they shall be filled”. Because instead of personal righteousness, which is what I have thought the sermon said for the past 24 years, you get an invitation that is gutsy, transcendent and so seemingly impossible that it requires faith.

I am promised for my efforts to be filled and satisfied. So I’ll keep working with you for a more just world where kids aren’t abused, sold into slavery or prostitution, and where villages are homes for families rather than bon-fires and training grounds for new military recruits. It’s worth it people. Justice is worth our effort, worth our prayers.

To finish this incredibly short resurrection, I’ll quote the man who speaks for me today with sharp and timeless words: “If to be feelingly alive to the sufferings of my fellow-creatures is to be a fanatic, I am one of the most incurable fanatics ever permitted to be at large.”―William Wilberforce