Partners Relief & Development has a team member in Bangladesh right now who is meeting victims of the recent violence against Rohingya people in West Burma. Today he met Aisha,a survivor from yet another destroyed village. This posting describes how his village was attacked and burned down, and how members of his village were lost, killed or taken away, including his two year old daughter.

Aisha heard the military vehicles and then saw large army trucks full of soldiers and extremists who were armed with guns and clubs. They drove into Killadong Majarpara, his village in West Burma and home to 2,500 other Rohingya Muslims.  It was 11:00 pm on the 22nd of January. Knowing the multiple and brutal attacks so far, he quickly found his way out of the village to look for a safe place to hide. 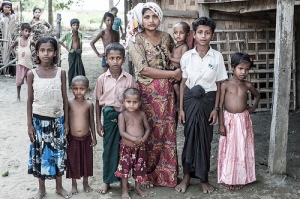 This woman’s husband drowned in a pond while trying to escape the police who were torturing him. Now she is destitute with 7 children. This is a common story with the Rohingya people of West Burma. Pray for them and share their story.

While he was running, the mob of soldiers and extremists beat and killed a number of his fellow villagers. Four bodies were found with gunshot wounds and 12 more are missing. The news he heard so far is that 700 women and children were taken in large trucks to a “prison.”

Finding a place in a nearby village he sent for his wife and 7 children. After they were reunited on the 23rd, they and 8 other families paid a boat owner to take them from the shores of Burma, to the Southern-most tip of Bangladesh. Once they were on board, Aisha took inventory. He found his mother, father, wife, and 5 of his children. He counted again and, frantically, a third time. His precious two-year-old daughter was not in the boat. He had no idea where she was.

The boat owner wouldn’t return because of the danger it would put him and the 8 other families in. Aisha sat sobbing on the floor today describing these events to our team leader. He recounted his ordeal, especially the trauma he continues to experience because he had to leave his two-year-old daughter behind.

They were fortunate to make it to the other shore and get away undetected by Bengali authorities, whose policy is to immediately deport them back across the thin strip of ocean that divides Burma from a peninsula of Bangladesh.

He begged for a place to stay in an unregistered camp of refugees numbering at least 100,000 souls outside of Cox’s bazar. With no food, clothes, blankets, or any other life-essential provision, they settled into their square footage of misery. A kind neighbor gave them a piece of plastic to keep the rain off of them.

Our team leader met Aisha today and heard his story. He ended with a description of his village being burned to the ground last night. “How do you know it was your village?” our team leader asked. Aisha replied that he talked to his brother who is still trapped on the Burma side of the border and he confirmed it. “We could see it from here too,” he said. “It’s only 28 kilometers away and it lit the sky.”

Our team leader then asked him if he had any news of his two-year-old daughter. Looking down at the floor, he just said “no.”

Our team leader gave Aisha enough money to get blankets for his family, for his mom and dad, and to buy cooking pots and the basics they will need to survive. He prayed for this Muslim leader. He asked God to bring peace to his country so he can go home, and that, somehow, peace can come to his heart so he can be comforted.

For those of you who support our work with the displaced people of Burma, thank you. Aisha is one of the thousands of people this month who can say they encountered true compassion this month; that a small faith inspired group reached out to them, embracing tremendous risk to find ways to help them and strive for justice.

It is your support that makes our work with victims of war possible. I am deeply grateful for you and offer this story as a reminder to pray, share this story, and give as you feel moved by the same spirit that moves us.